The New York Stock Exchange floor on the last day of 2017 trading. If there’s a reversal in 2018, said Jerome L. Dodson, the president of Parnassus Investments, “it’s going to hit the index funds hard.”

In the midst of a long-running bull market that is now reaching momentous proportions, most investors may well have forgotten that just two years ago, during the first five trading days of 2016, the market dropped 6 percent. It was the worst five-day start to a year ever and supposedly a harbinger of bad times.

There wasn’t a single day last year when the S.&P. 500 fluctuated more than 2 percent, a level of low volatility unseen since the mid-1960s, according to James Stack, a market historian and president of InvesTech Research.

In a rare convergence, investor euphoria spread across the globe. A measure of market performance, the MSCI All Country World Index, gained 22.7 percent last year, closing at a record high. And so far this year, stocks have continued their advance. On Thursday, the Dow broke the 25,000 barrier for the first time, and technology stocks are soaring to new highs. Cryptocurrencies like Bitcoin are adding a whiff of bubblelike mania.

And that may not be such good news for investors.

“If there are any certainties, one will be that this party will eventually come to an end,” Mr. Stack said. “A correction would be healthy. The longer we go without one, the greater the risk this will end badly. A lot of people will get hurt. And when it ends, it will end badly, and with high volatility.”

That doesn’t mean the end is imminent, according to Mr. Stack and other investment managers and market experts I interviewed this week. All of them successfully navigated markets last year, when the greatest risk was being underinvested.

“Everybody thinks the market is overvalued,” said Jerome L. Dodson, the founder and president of Parnassus Investments. “So do I. I’m expecting a correction, but I was expecting one after Trump was elected. I was wrong. The market can keep going up even when it’s overvalued.”

Mr. Dodson didn’t move into cash last year, and his Parnassus Endeavor Fund, where he’s the portfolio manager, gained nearly 20 percent last year and is ranked by Morningstar as the No. 1 fund in its category (large-cap growth) over three-, five- and 10-year periods. 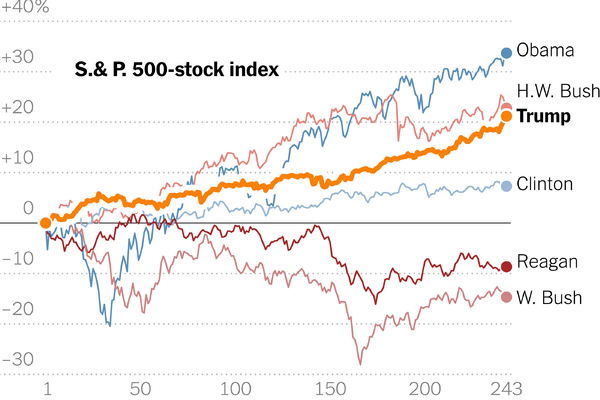 President Trump has routinely celebrated, and taken credit for, the stock market’s record-setting climb during his first year in office.

“Most seasoned investors realize this market is overvalued and overbought and it’s been a long time since a normal correction,” Mr. Stack said. “They’re nervous.” Nonetheless, he said he was 82 percent invested in stocks, with 18 percent in cash, only slightly more than usual. He said he had learned from decades of market experience that “overvaluation isn’t what causes bear markets — it never has and never will.”

In addition, he said, “there’s going to be tremendous political pressure to keep the party going,” especially since Mr. Trump has so often cited the bull market as evidence of the success of his presidency.

So what should investors do?

It’s probably no surprise that Burton G. Malkiel, the renowned emeritus professor of economics at Princeton and author of the 1973 classic “A Random Walk Down Wall Street: The Time-Tested Strategy for Successful Investing,” recommends that investors “stay the course.”

“If the sharp rise in the stock market in 2017 has unbalanced your portfolio with a higher proportion of equities than is consistent with your risk tolerance, then you could do some rebalancing by trimming the equities down to the proportion at which you are comfortable,” Mr. Malkiel said. “But do not try to time the market. Nobody can consistently time the market, and those who try it usually fail.”

Although Mr. Malkiel is a longtime champion of passive, low-cost index investing, a strategy that has worked well since the financial crisis, last year he endorsed an “advanced indexing” approach at the automated investment manager Wealthfront, where he is chief investment adviser. Wealthfront aims to outperform strictly passive investing, and its taxable portfolio returned 20.56 percent last year, which indeed beat its benchmark.

Mr. Dodson is an active manager who focuses on stock selection. “I’ve never had a good record at market timing,” he said. “I look for stocks that are undervalued, but I’m having terrible trouble finding anything that’s reasonably priced.”

Technology stocks in general “are way overvalued,” he said. He has cut back on his fund’s large positions in Micron Technologies, Apple and Applied Materials after they notched big gains. With benefit of hindsight, he wouldn’t have sold them, “but someone once asked Bernard Baruch how he became so rich,” Mr. Dodson said. “‘I made my money by selling too soon,’” the famed financier replied.

Still, there are “a few” undervalued opportunities, Mr. Dodson said. He cited the health care sector: The biotech concern Gilead Sciences and the generic-drug maker Perrigo are two of his fund’s largest holdings. The toymaker Mattel “is on the bargain table,” he said. And even in technology, his fund has a large position in Qualcomm, currently fighting a takeover bid by the rival chip-maker Broadcom.

If so much is indeed overvalued, then this year’s market could well reward discerning active managers. “I worry about the index funds,” Mr. Dodson said. “They’re getting close to 25 percent in technology, given the high valuations and market caps. If there’s a reversal, it’s going to hit the index funds hard. This may finally be the year that active managers outperform.”

Mr. Stack agreed. “Active management isn’t about beating the market but about achieving market gains within a defined acceptance of risk,” he said. “There are selective opportunities, but you have to dig to find them. None are true bargains anymore.”

He recently bought shares in the diversified industrial manufacturer Ingersoll Rand and is moving his portfolio toward more defensive positions in consumer staples, energy and materials. “I’d rather be early with portfolio defenses and leave some profits on the table than go into a bear market fully exposed,” he said.

Mr. Stack said that in examining bull markets over the past 50 years, he had found that both the technology and energy sectors outperformed in the late stages of a bull market. He said investors “should have some portion of their portfolio in the materials sector, notably energy, which had been so out of favor” until mid-2017.

In my outlook column last year, Damien Courvalin, head of energy research for Goldman Sachs’s Global Investment Research commodities team, was uncannily accurate in forecasting that oil prices would recover in 2017 and stabilize at $55 to $60 per barrel. (West Texas intermediate crude oil futures ended the year at $60.42.) So I asked him what his team was predicting this year.

“From a total-return perspective, it’s quite compelling to be invested in commodities,” he said — even though he doesn’t see oil prices rising much above current levels by year’s end. That’s because, thanks to the shale oil revolution, producers outside the Organization of the Petroleum Exporting Countries can easily ramp up production when prices are $60 to $65. But commodities investors can still make a profit, he said, by betting on stable to rising prices in the futures market.

Like Mr. Stack, Mr. Courvalin noted that commodities and energy typically do well in the late stages of an economic expansion. Non-energy commodities may do even better, since they have no equivalent to shale and mining companies can’t increase production quickly in response to rising prices. In the mining sector, “margins are improving, orders are picking up, and we’re seeing new investment,” he said.

It may seem a paradox that investors’ worries about the coming year are mounting even as the economic outlook seems so bright. “Investors are struggling with this market because the skies are blue,” Mr. Stack said. “It’s rare when you have an investing climate like this one, where it’s all but impossible to find something to worry about, either domestically or globally.”

But that’s true in the late stages of most bull markets, he said, meaning investors need to be alert. And while virtually no one can foresee the next catalyst for a correction or bear market, even a hint that the Federal Reserve might raise interest rates more than expected would most likely set off seismic tremors.

“Most bull markets die by the sword of the Fed,” Mr. Stack said.

With a Glance Backward, Brooks Brothers Looks to the Future

No One’s Talking About the New Tax Law

Tariffs? Time for a Plan B: ‘Gobble Up Every Bit of Material That I Can’

An Ad Executive Often in the Vanguard Peers Into the Future